In a moment for Knicks fans around the world, the beloved yet cursed team of NYC picked up a 3-1 record by demolishing a Philadelphia 76ers team that they didn’t beat for 4 years. But that wasn’t the only news. Celebrity attendees like Fat Joe and Trey Songz were courtside with legends like Spike Lee and DJ Premier, but the real magic happened outside when NYC local rapper Kosha Dillz was rapping in the rain after the game.

In an out of nowhere move, Fat Joe ran up on Kosha Dillz, tossed cash at him and grabbed the mic to begin rapping a portion of his famous verse off the late Big L’s collaboration “Enemy” in the pouring Nor’Easter rain.

Timing couldn’t be better for the local Brooklyn artist Kosha Dillz. His latest music video, Is It Me, produced by Sad Pony (Nicki Minaj, David Bowie, Yves Tumor) and off his latest album Nobody Cares Except You dropped today. The music video features Kosha Dillz and all his cohorts from viral sensation Spidercuz to fellow Orthodox Jews and all of Kosha’s NYC identities in red, green and blue tuxedos, as well as his Moses with the Bars fit which became minted in the scene via Sidetalk NYC and Whatisnewyork. He raps way more seriously about the faults of life and self blame while continuing the endless grind.

Lyrics:
Insane again for fame again and no one knows your name again
and maybe then if you do someone will be like you and start hating it.
Hocus pocus keep the focus, I’m too dope to be a dope head, two movies out and no one knows this, all I do is keep it one hootie and the blowfish. That’s how much of a star I am.

“Is it me” promises to be an anthem for all the rappers and hard workers that you think you may heard of. Now you have.

Check out the new video above. 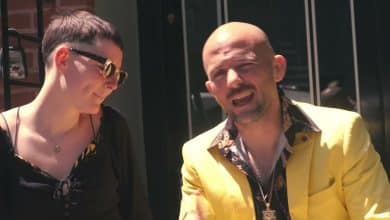